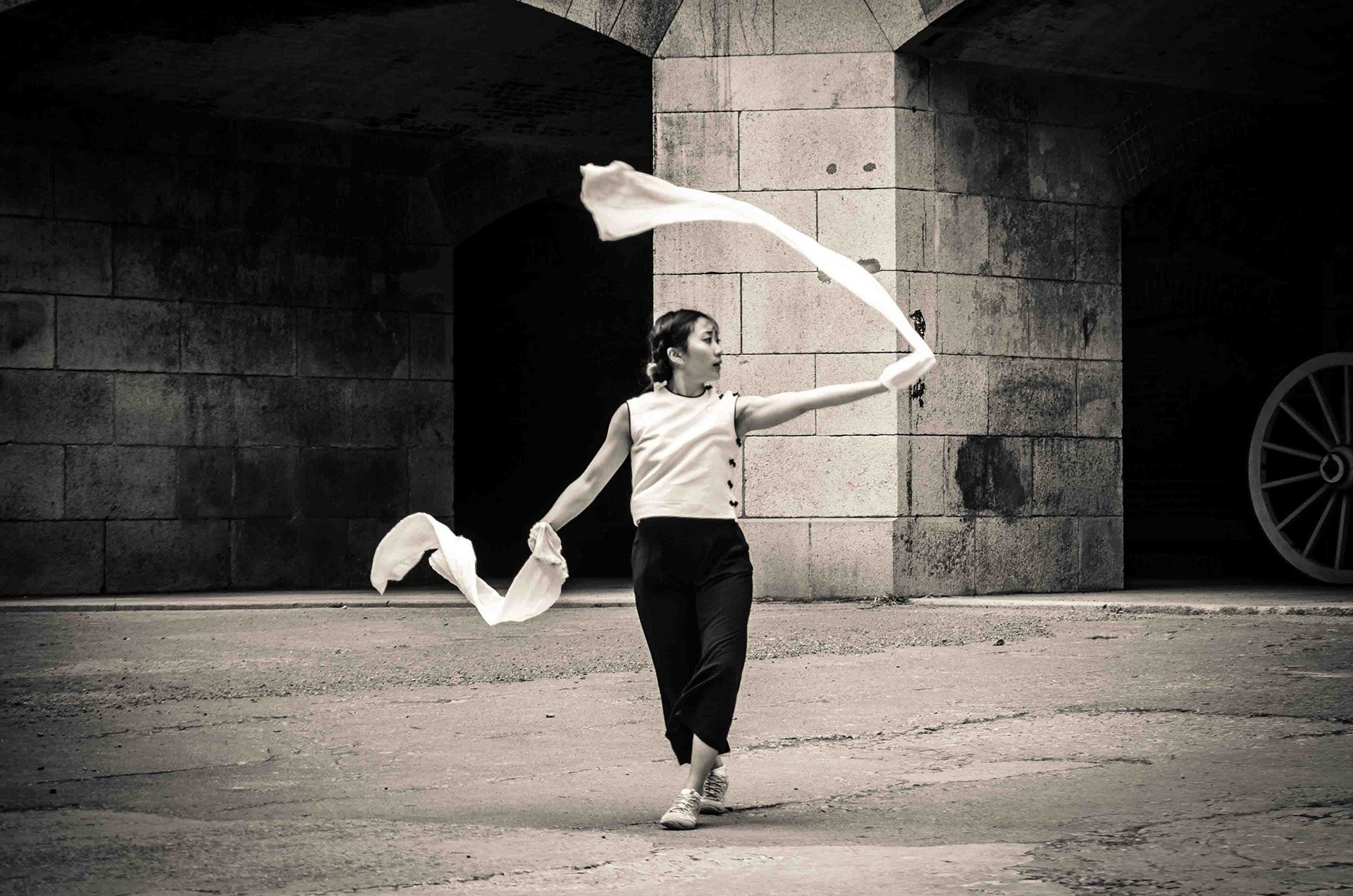 Asian Improv aRts is pleased to announce a special performance as part of Genryu Arts’ Japan Day Festival on Saturday, June 17, 2017 in San Francisco Japantown’s Peace Plaza. Scheduled for the 2:30 - 3:10 pm slot in the Festival, “Reconciliations” is an interdisciplinary performance work by the national intercultural touring ensemble Asian Improv Nation featuring dancer Yi-Ting Hsu, choreography by Lenora Lee, violinist Michael Jamanis, shamisen, taiko, and electronics by Tatsu Aoki, taiko by Melody Takata, drums/gongs performer Karen Stackpole, and saxophonist Francis Wong. A part of Asian Improv aRts’ 30th Anniversary national season, this work under the artistic direction of Francis Wong  honors Japantown’s Peace Plaza and Japantown itself as a sacred space for the healing of past wounds from World War II. Admission is free and open to the public.

Yi-Ting Hsu (Principal dancer) a native of Taiwan, graduated from University of Taipei in 2015. Yi-Ting has trained in contemporary, ballet, Chinese martial arts, Tai-chi initiation, choreography, improvisation and composition. She has danced with Hsu Chen Wei Production, Les Petites Choses Production, Lenora Lee Dance, and David Harrera Performance Company, and has performed in Young Stars, New Vision and Faaaaat Festival, and shown her work at LevySalon. Since 2013, Yi-Ting has worked with Lenora in her film project “Light” and her dance projects “Fire of Freedom” and “The Eye of Compassion”. She is delighted to be working with Lenora again in “Within These Walls”.

Lenora Lee (choreography) has been a dancer, choreographer, and artistic director in San Francisco, Los Angeles, and New York and is the founder and artistic director of Lenora Lee Dance. She has been an Artist Fellow at the de Young Museum, a Djerassi Resident Artist, and a Visiting Scholar at New York University through the Asian/Pacific/American Institute. She is currently an Artist in Residence at Dance Mission Theater.  Her work weaves together multiple artistic disciplines and socially conscious work, pushing the relevance of arts in various communities throughout the country.

Karen Stackpole (drums/gongs) has a deep affinity for gongs. In her explorations of metals, she has cultivated some distinctive techniques for drawing harmonics out of tam tams with various implements. She specializes in dynamic soundscapes and textures, but has also contributed gong sounds to various musical genres as well as contributing source material for film soundtracks. Karen is active in the creative music scene and has participated in music festivals and performed solo in Seattle, Los Angeles, Baltimore, Chicago, and the Bay Area. In addition to solo work, she currently performs and records with various projects including Machine Shop: Live Amplified Gong Experience, Sabbaticus Rex, Ghost in the House, Vorticella, Dynosoar, the Francis Wong Unit, and the rock band Steel Hotcakes.

Francis Wong (Artistic Director) was dubbed one of “the great saxophonists of his generation” by the late jazz critic Phil Elwood. Few musicians are as accomplished as Wong: for over three decades he has performed his innovative brand of jazz and creative music for audiences in north America, Asia, and Europe. He is a co-founder and the Creative Director of Asian Improv aRts. He holds an AB in Economics from Stanford University and recently completed his MA in Asian American Studies from San Francisco State University (SFSU). He has been on faculty at UC Santa Cruz American Studies and the SFSU Music Department and recipient of commissions and awards from the National Endowment for the Arts, California Arts Council, San Francisco Arts Commission, Rockefeller Foundation, Ford Foundation, Jazz Journalists Association and the City of San Francisco.

Tatsu Aoki (shamisen, taiko, electronics) -  is a prolific composer, musician, filmmaker, and educator. Based in Chicago, Aoki works in a wide range of musical genres, ranging from traditional Japanese music, jazz, experimental and creative music. To this date, Aoki has produced and appears in more than 90 recording projects and over 30 experimental films. He is the Executive Director of Asian Improv Arts Midwest and a Professor of Film at the School of the Art Institute of Chicago.

Michael Jamanis (violin) received a Bachelor of Music from The Juilliard School, a Master of Music from Yale University, and a Doctor of Musical Arts from Rutgers University. He has been the recipient of numerous awards throughout his career, including the Lincoln Center, Victor Herbert, Metro-Media and National Federation of Music Clubs Awards. In addition, Jamanis has worked with such artists as Arnold Steinhardt, Joseph Fuchs, Syoko Aki, Bernard Greenhouse, Aldo Parisot, Timothy Eddy, Claude Frank and Leonard Bernstein. Dr. Jamanis is a core member of Inspira, an ensemble that fuses classical and jazz vocabularies to create contemporary performances that promote beauty and social justice.

Melody Takata (taiko) has been performing and teaching in the traditional arts for over 25 years, from her upbringing in the Japanese American community of Los Angeles through her decades of service in San Francisco’s Japantown, one of three remaining such communities in the continental US. In addition to a body of works for kumi taiko (ensemble drumming), she has realized a cycle of interdisciplinary works addressing themes of tradition and innovation in Japanese culture, role and empowerment of women in society, and loss and renewal from the incarceration of Japanese in World War II and the ongoing effects of gentrification on urban communities. She is founder and director of GenRyu Arts, established in 1995.