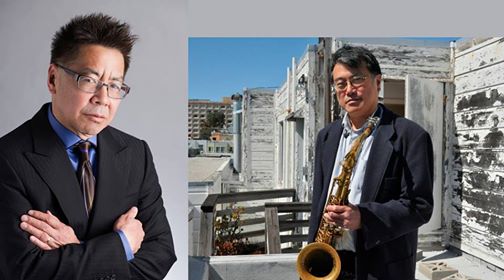 Jazz in the Neighborhood proudly presents Jon Jang & Francis Wong with special guest Hafez Modirzadeh. Presented as part of the 30th anniversary celebration of Asian Improv Arts, this will be no ordinary event.

Starting off, the Jazz Journalists Association will be honoring Jang and Wong with the 2017 Jazz Heroes Award for their work as jazz activists and advocates who have made a significant impact in their local communities. Jazz in the Neighborhood is honored to be hosting the awards presentation, which was announced after we had booked the group some months ago.

The musical portion of the evening begins with a saxophone trio improvisation by Francis Wong, Hafez Modirzadeh, and emerging artist William Berg.

Next will be a quartet performance with Jang on keys, Modirzadeh sitting in for Francis Wong, with Gary Brown on bass, and Deszon Claiborne on drums. Their set will encompass the music of resistance that is part of the legacy contributed by Charles Mingus and Max Roach as well as tunes representing the hybrid of Chinese folk music in a black context.

After the intermission, Jang and Wong will be joined by Deborah Wong, UC Riverside music professor and author of Speak It Louder: Asian Americans Making Music, to reflect on the important and influential history of Asian Improv Arts, co-founded in 1987 by Jang and Wong to produce, present, and document artistic works that represent the Asian American experience.

Jon Jang is a pianist, composer, bandleader and activist whose music reflects his thirst for social justice and his gift for merging jazz with traditional Chinese musical forms and cadences. He has created an ambitious body of epic works that is nothing less than a strikingly vivid history of the Chinese American experience.

Though a brilliant saxophonist, Francis Wong has often put his performing career on the back burner to serve the Bay Area arts community. He’s been particularly involved in supporting artists seeking to create music inspired by and growing out of movements for social justice.

As always, Jazz in the Neighborhood and Community Music Center present music at prices people can afford. Please join and support us as we honor these two great musicians.

Admission is $15 general, $10 for students and seniors